This recipe is based on a recipe from my favorite cookbook, 52 Weeks of Proven Recipes for Picky Eaters but I've made a few changes based on what I have in my pantry, so here is my version of Pigs in Rice! 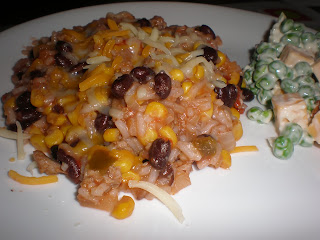 Combine 2 16-oz. bags of frozen peas, thawed with:
Combine well, then chill until ready to serve. Top with 4 strips of bacon, crumbled, before serving.
Posted by Claudine at 11:06 PM No comments:

Thanks, Mindi, for this yummy recipe! My boys just devoured this up tonight! This was my first attempt with meatballs and they weren't as hard as I was anticipating. I think they would work well in almost any recipe calling for meat balls. I might try them next time I make spaghetti. 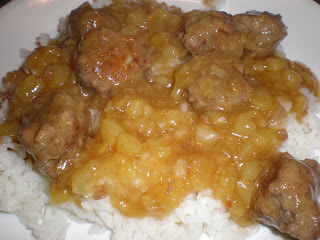 Make meatballs by combining:
Fry in a skillet and set aside.

Combine cornstarch with the cold water and stir into boiling mixture stirring constantly. Simmer and stir until thickened and clear. Add meatballs and simmer an additional 10 to 15 minutes.

I saw this recipe the other day over at the Homesteading Housewife and tried it out last night. I knew that Jarom isn't the biggest fan of raisins baked in things, and I don't have any raisins in my pantry any way, so I just substituted them for chocolate chips and they were very tasty! 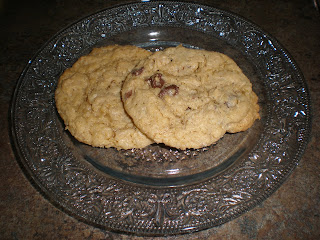 Posted by Claudine at 8:08 AM No comments:

Need a yummy lasagna variation that doesn't take hours to bake? Try this one! Instead of noodles, you use corn tortillas (making it gluten free for the wonderful Celiacs in my life) and tastes pretty darn good! 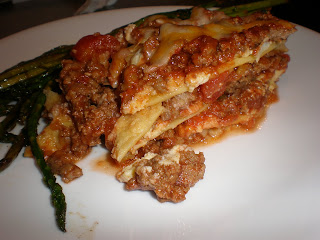 In a small bowl, combine ricotta cheese, eggs, and cilantro.

Now you can assemble your lasagna!

In bottom of a 13 x 9 x 2 in. baking dish, spread 1/2 cup of the meat mixture. Top with 1/2 tortillas (I cut mine in half to make it fit the dish easier); spread 1/2 of ricotta cheese mixture over tortillas and top with 1/2 of the grated Monterrey Jack cheese. Repeat layering, ending with grated cheese. Bake, uncovered, in 350 degree oven 20-30 minutes or until hot and bubbly. Let stand 10 minutes before cutting into squares.

***************
And what's the perfect companion to... well, just about any entree? Asparagus. I saw this while I was at the store yesterday and it was just calling to me. I just sauteed it up with some butter, coarse salt, and True Lemon (crystallized lemon juice), then right before taking it off the heat, I added a little bit of chopped parsley. Even Isaac devoured it. 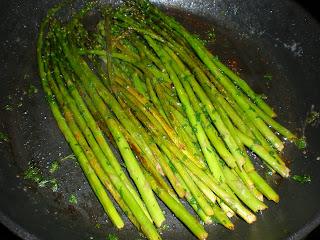 Still not doing tons of cooking this week with this darn infection, but I did muster up enough enthusiasm to make my fam a Valentine's breakfast. We had pink heart-shaped waffles with home made strawberry syrup made from the last few frozen strawberries lingering in my freezer. Yum! 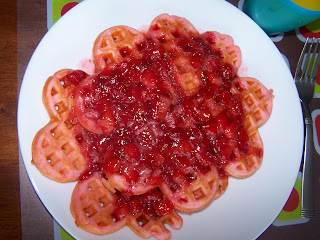 What did you cook for you loved ones?
Posted by Claudine at 10:45 PM No comments:

I haven't been feeling too good lately, suffering from a lovely sinus infection, so the home cooking has been a bit minimal. But the other night I called my mother-in-law to get her recipe for Hamburger Soup. It just sounded good. It was easy to make, and I just used what I already had in my pantry. And what goes fabulously with a nice, warm bowl of soup? Bread sticks, of course! 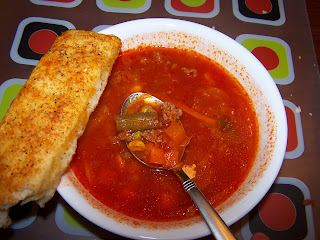 In a large soup pan, add:
Then add any other veggies you have on hand. I added about 2 cups of frozen mixed veggies (corn, peas, green beans, and carrots). You could also add diced potatoes, mushrooms, bell peppers, you name it.

Bring to a boil, then reduce to a simmer. Cook for at least an hour so the flavors can blend. You could also put everything in a crock pot for a few hours.

When we ate leftovers for lunch the next day, we added some Parmesan cheese on top, very tasty!
Posted by Claudine at 10:36 PM 2 comments:

Looking for a light, tasty treat? Try this little gem I found on the back of the church announcements last Sunday: 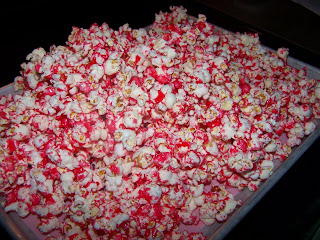 In a saucepan, boil:
Pour over 24 cups of air-popped popcorn. (I popped 1 cup of raw kernels and it was a little bit much, even with helpers taking the crown off the top of the bowl, so I would guess that if you popped 1/2 cup of kernels, it would turn out great!)

Mix carefully, mixture is very hot! Cool and enjoy!
Posted by Claudine at 10:31 PM No comments:

I saw this recipe in the Kraft Foods magazine and gave it a try last night. It was pretty good! I love sweet potatoes and want to try to incorporate them into our diet a little better, not just at Thanksgiving. I forgot to take my own pictures so I'll just use the ones from the website. Mine turned out almost as beautiful. Ok, not quite. But they were yummy! (And here's a small confession, I didn't have pecans on hand, but I did have some mini-marshallows. I think you know where I'm heading with this one...)

Here's another repost. You really need to try this one, it's just heavenly. 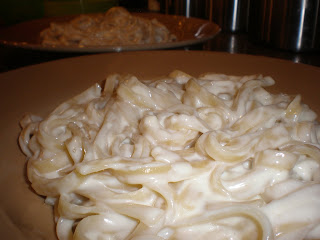 Cook fettuccine in a large saucepan according to package directions. Drain well. In the same saucepan, heat cream, butter, and salt over medium-high heat, bringing to a boil. Remove from heat. Add fettuccine and cheese, tossing to combine well. Continue cooking over low heat, tossing continuously, about 2 minutes or until sauce has thickened. Sprinkle with pepper.
Posted by Claudine at 11:27 PM No comments:

Here's a repost of the breadsticks I originally put on my other blog, but this is a much better home for it. I've made these a few times now and each time they turn out fabulously. I've also used it as pizza dough and everyone loved it! 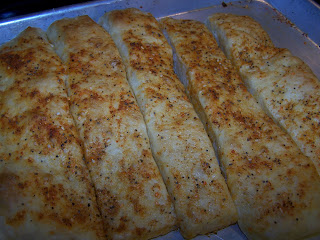 Caution, this will happen, even as you try to document your own bread stick triumph: 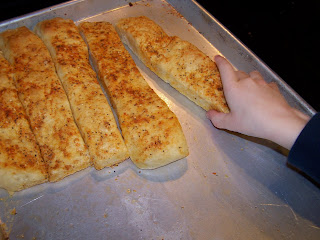 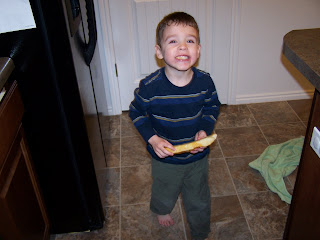 This fun little recipe comes from Real Mom Kitchen and I made these tonight to bring to my in-laws for dinner tomorrow. The preliminary report? Excellent! As you can tell by my picture though, I didn't have two boxes of Devils Food cake mix to use, so I used one box of dark chocolate, and to really live on the wild side, I used a box of confetti cake and made them up in two separate batches. The confetti cake cookies turned out a little flatter while the chocolate ones were more puffy, but they both taste very good. I used my small Pampered Chef scoop and it worked very well to give the cookies a nice, uniform shape. 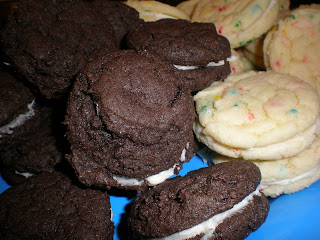 Mix by hand, drop spoonfuls on to cookie sheet and flatten slightly. Bake @ 350° for 8-9 minutes. Will make 48 cookies, so 24 sandwiches.

Mix together, it will seem really thick but just keep mixing.
Posted by Claudine at 11:15 PM 2 comments:

For dinner the other night, I made Tater Tot Casserole. I got the idea from a cookbook my friend's neighborhood put together, and it was a new idea for me, so I'll pass it along in case you haven't made it before. It's essentially Shepherd's Pie, only you use tater tots instead of mashed potatoes. 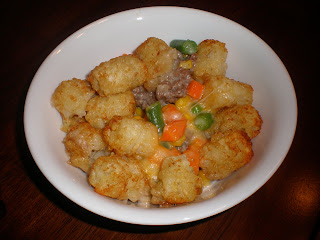 Cook a pound or so of ground beef in a skillet, you can add some chopped onions if your family likes that kind of thing (ours does). Drain the fat, then add a can of cream of mushroom soup and a little milk so loosen things up.

Pour the meat in an 8 x 8 baking dish (a little Pam on the dish is a good idea), then add a layer of vegetables (corn, green beans, mixed veggies, whatever).

Sprinkle a generous layer of shredded cheese on top of the veggies (a good cupful). Then layer your tater tots on top of the cheese.

Bake in the oven for at last a half hour, or until the cheese has melted and the tater tots are hot.

Enjoy!
Posted by Claudine at 12:31 AM No comments:

Connie got a cute book for the kids, Arnie the Doughnut, and after reading that, I really wanted to eat a donut (go figure), so instead of heading over to the store, I thought I would try making my own. I've never made donuts before, so I started with a google search and found this recipe. They tasted very good, but I realized a few things like I was making them that I will do better next time around (especially making sure the oil is a little bit hotter before cooking so they all turn out nice and golden, not just the last few...). Enjoy! 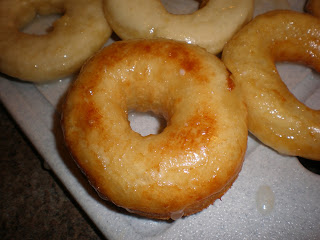 Before you get started, microwave a potato until it's nice and soft, then scoop out a half a cup to be added to the recipe and set aside.

Microwave 1 cup of milk so that it is warm (not hot) add the 5 teaspoons of yeast (2 packets) and a pinch of sugar and stir. Let stand for about 5 minutes.In a bowl combine:
In the bowl add:
Mix the dough well by hand or in a mixer with a dough hook for 3 minutes.

Prepare your kneading surface by spreading a few tablespoons of flour on a smooth surface.

Put the dough in the middle of the flour and sprinkle a little flour on top and on your hands. Knead the dough a few times. Once the dough has been kneaded, spread it out to be a half inch thick with your hands or with a rolling pin.

Now it is time to cut out the donuts. You can use a donut cutter or just use something about the same size and then find something to make the hole with.

Place the donuts on a floured pan to let rise as you get the oil ready. Let them rise for a total of ten minutes (it takes about five minutes for the oil to heat up).

Pour about a half inch of oil (vegetable oil) into a cast iron pan. An electric fry pan works great also.

The oil needs to be about 360 degrees which on my stove is about Medium to Medium High. If the oil starts to smoke it is way too hot.

Test the oil with some of the scraps of dough and when it is ready cook the donuts until golden brown on each side.

Allow the donuts to cool on a rack or on some paper towels so that the oil soaks off.

While they are cooling, you can prepare the glaze. Put a slightly warm donut face down in the glaze, turn slightly and remove, then allow to dry for a couple minutes.

Heat 2 Tablespoons milk in the microwave until warm, then add:
1 cup of powdered sugar
1/4 teaspoon of lemon juice
1/4 teaspoon of vanilla extract
If you a really thin glaze, just add a little more milk.

Chocolate Glaze:
Heat 3 Tablespoons of milk in the microwave until warm, then add:
1 cup of powdered sugar
2 Tablespoons of Hershey Cocoa
Posted by Claudine at 12:05 AM 1 comment: